For many, music is indeed a foreign language, complete with unique and colorful music terminology that helps us understand what we’re playing or listening to, and how to play it. Beyond the basic music terminology itself, it’s important for any student of music to understand when these terms might be used and how to interpret them, in addition to those terms specific to his/her instrument.

Basic music terms can refer to musical time periods, types of pieces, sections or parts within a piece, notes, rhythms, articulations, and a composer’s intent on how to execute certain passages within the compositions themselves. Music theory terms are important to learn as well, for greater context when learning about music.

Beyond the time periods that mark unique stylistic changes within the music itself, exist a wide variety of the types of pieces and compositions. Orchestral pieces include the overture, symphony, concerto, ballet, opera, and chamber music. There are countless subgenres as well that incorporate elements of these types of orchestral music into more contemporary styles. Vocal music includes choral works and a-capella.

Since the beginning of the 20th Century, there has been an explosion of types of songs and compositions, expanding our musical palette into genres so colorful and eclectic. Early Blues music influenced nearly every contemporary style of music that came after. Jazz composition styles influenced by the Blues include Ragtime, Big Band, Bebop, Fusion, Free Jazz, and Modern Jazz. Riff-based rock, disco, singer-songwriters, country, pop hits, and rap/hip-hop are all styles with unique composition types influenced by the blues. Electronic Music and EDM (Electronic Dance Music) describes compositions composed fully digitally.

Sections or Parts Within a Piece

Within orchestral music pieces are sections that can have a unique feel, meter, length, and orchestration. Common terminology that describes sections within orchestral music include movement, sonata, and minuet. Common musical terms that refer to parts within a piece include, verse, bridge, chorus, refrain, intro and outro. 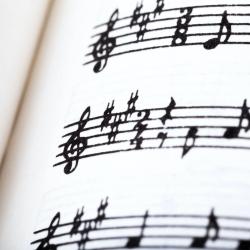 Notation is a simple way to refer to music written on a page. Musical notation comes with a plethora of important terms and symbols to know in order to fully understand and perform what is written.

From the Grand Staff, key signatures, time signatures, measures, and bars to actual notes, rhythms, barlines, beats, repeats, and codas, this is the framework around which the music is played. These terms refer to essentially “what” is being played.

Rhythm plays a critical role in the performance of the music. A performer must know the duration each note is required to play and composers must understand how to communicate that information as well. Written music notation will see rhythmic terms like whole notes, half notes, quarter notes, eighth notes, sixteenth notes, et al. Dotted notes indicate the note to be played 1.5 times its value.

Music theory is the understanding and general context of how music fits together, and the concepts in its creation and performance. An argument can be made that notation and articulations are parts of music theory.

A key is the scale or sequence/group of notes upon which the song is based. The name of a scale comes from the lowest or first note, also called the tonic. Tonic can also refer to the chord based on the first/lowest note in the key. The dominant is the 5th note in the scale or the chord built off the 5th tone. The circle of 5ths is a diagram showing the relationship between all twelve keys in the chromatic scale.

What musical terms should I know when learning an instrument?

This can obviously depend on the style of music you’re learning. Beyond knowing the parts and pieces of your instrument, any student will be required to have some familiarity with quite a few basic music terms.

For those seeking to learn more historical Western music from Baroque through Classical and Romantic music, it’s important to know and understand parts of compositions and how they fit together.

For reading music, it will be critical to be familiar with notation, dynamics, rhythm, and articulation markings. These elements will help you understand what to play and how to play the music.

If contemporary and popular music styles are the goal, more than likely chords and melodies will be a large part of your learning path. Understanding harmony and it’s terms and relationships will go a long way to accelerate the learning process. 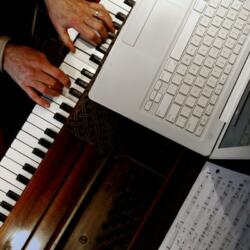 On occasion, certain instruments may have unique musical terms and phrases specific to those instruments. In addition to the actual parts of the instrument, some terms may refer to how notes are played or how the sound can be influenced.

Unique piano terms like dampers, pedals, soundboard, and spinet are common, as well as reference to the keyboard (the actual arrangement of key on the piano).

Guitar players will often use terms like fretboard and fretting a note to describe the act of playing a note in a specific place. Guitar players also bend notes and can play pinch harmonics, as well.

Woodwind and brass instruments will often use terms like tonguing a note or use notation for breath markings to indicate where and when to take a breath.

Music terms relating to time periods and composition types are generally used when describing  influences of composers, a style of music, how it’s constructed, typical ornamentation and embellishments, or when explaining commonalities within certain genres.

Terms relating to the sections within a piece are very commonly used in songwriting, practice, and rehearsal type settings when instruction is needed at a specific place in the song or composition. Reference to these sections are convenient ways for musicians, teachers, and students to communicate that information.

It goes without saying that when learning to play music, notation elements, rhythm, articulations, dynamics, and tempo, basically the how and the what, are all critical pieces of information that must be communicated accurately and effectively. Referring to specific notes and performance aspects is how teachers can effectively communicate important information and help students improve. Composers and songwriters need to know these basic terms to help create compositions that reflect the music as they hear it and wish it to be played.