When looking for a family of instruments that really blows, look no further than woodwinds. With an unmistakable sound, timbre, and colorful texture, each of the instruments in the woodwind family plays a major role in so many different types of ensembles.

From big band and orchestral music, to small groups, rock bands, and television and movie scores, woodwinds bring dramatic flair to any composition.

What are the characteristics of woodwinds?

The name woodwinds is somewhat of a misnomer. While all the instruments in this family used to be made of wood, now they’re primarily composed of wood, plastic, metal, or some combination thereof. All members of the woodwinds family are tubular-style instruments with holes along the body, a mouthpiece at one end, and an opening at the other where the sound is emitted.

What instruments are in the woodwinds family?

Flute – The flute is the oldest of all the woodwind instruments. It is approximately two feet long and held with both hands in a sideways fashion. At one end is the mouthpiece and the flautist will cover various holes along the body while blowing into the mouthpiece to change the pitch. Piccolos are a smaller, half-size version of the flute and produce the highest notes in the woodwind family. Because the size of the piccolo is so much smaller, the pitches produced are much higher.

Clarinet – The clarinet is a long cylindrical instrument, held with both hands upright, with a mouthpiece at the top end and a straight opening at the bottom. Clarinets come in many different sizes and produce anywhere from a bright sound to a darker, rich sound. The mouthpiece uses a reed through which the clarinetist will blow, and the holes can be covered with the fingers to change the pitch.

Saxophone – The saxophone is much larger than the clarinet with a wider cylindrical body and curved bell opening at the bottom. Saxophones come in different sizes which produce a variety of ranges in pitch. All saxophones have a mouthpiece at the top end which uses a reed through which the saxophonist will blow to produce sound. The soprano saxophone resembles a clarinet and does not have a curved, bell-shaped opening at the bottom. The alto and tenor saxophones both have the curved bell-shaped opening at the bottom, and the baritone saxophone has a much larger curvature to the entire body. The holes along the body can be covered with the fingers over the keys to change the pitches the instrument will produce. 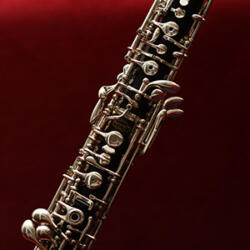 Oboe – The oboe can easily be mistaken for the clarinet, if not for the distinctly different mouthpiece. The oboe uses a “double reed” mouthpiece, which consists of two reeds that the oboist blows through in order to produce the sound. Like the clarinet, the instrument is held with both hands upright and the fingers will cover the sound holes in order to change the pitch. Oboes are typically found in orchestral settings and scores for television and film. One interesting note, the oboe is responsible for tuning the orchestra before a performance begins.

Bassoon – The bassoon is a very long, piped instrument about 9 feet long, but bent in half in order for a musician to play it comfortably. Like the oboe, the mouthpiece at one end is a “double reed”. Sound is produced by blowing through the double reed mouthpiece, whereupon air travels down the tube and out the other end. There are many holes along the body and the pitch can be changed by pressing keys down that cover the holes. The bassoon generally play lower, sounding melodies and harmonic support.

Additional instruments in the woodwind family include the English Horn and Contrabassoon, both double reed instruments very closely related to the Oboe and Bassoon.

These instruments can be found in a variety of popular and contemporary music as well as more classical and orchestral styles. Peter and The Wolf has several characters portrayed by woodwinds and their unique sounds to help the audience visualize the characters.

Woodwinds have been featured in various radio hits over the years, too. The unmistakable sound of the flute can be heard in the Mamas & the Papas hit “California Dreamin” and just about every Jethro Tull song. Clarinet can be heard in songs by Billy Joel, Van Halen, Steely Dan, Joni Mitchell, and Paul McCartney. Even the oboe and bassoon can be heard on the classic hit “I’ve Got You Babe” by Sonny and Cher.

In Pink Floyd’s “Us and Them”, Michael Jackson’s “Bad”, or “Born to Run” by Brice Springsteen, the listener can hear the saxophone painting colorful textures. The saxophone is a popular instrument in much of contemporary music from rock and pop to rap and hip hop.

What are woodwinds typically made of?

At one time, all woodwinds were made of wood and clay. These days, woodwind instruments are made from a combination of materials that include wood, metal, plastic, platinum, and more.

Most woodwinds use reeds that vibrate as air passes over them, creating the sound that travels through the body of the instrument. Reeds are made of springy cane wood and attached to the mouthpiece.

How do woodwind instruments work? 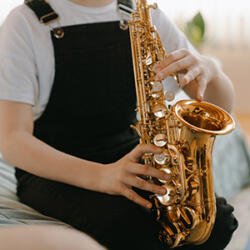 While all woodwind instruments may vary in shape, size, and materials, there are many things they all have in common. All produce sound by blowing air over or through a type of reed creating vibrations that resonate through the instrument. All woodwinds have holes located at various points along the body, some of which are covered by keys. When the holes are covered by fingers or keys that are pressed down, this changes the pitch produced by the instrument.

Clarinets and saxophones are “single reed” instruments. The reed vibrates when air passes over the reed and through the mouthpiece.

Oboes, English Horns, and Bassoons are all “double reed” instruments. Double reeds are very similar to single reeds, but the physics is a bit more complicated. Similarly, however, the vibration of the reeds creates the sound that flows through the instrument.

The Verdict on woodwind instruments

With versatility to span genres from classical, big band, jazz, and contemporary rock and hip hop, woodwinds create colorful textures and sounds that give extra life to any composition. Whether it’s simply background support or searing solos, woodwinds add color, edge, and punctuation.

And beyond just listening, learning to play music has numerous benefits and woodwinds are no exception. They improve listening skills, dexterity, hand-eye coordination and numerous other skills. In addition, building confidence and finding a voice through music is a gift that keeps on giving throughout life.

PrevPreviousUnderstanding Instrument Families: Piano and Keyboard
NextThe Gift of a Guitar – A Gift That Keeps on GivingNext